Who am I? Good question! Below are some kind of official biographies (like one by Ken Sharp and everything) with a few photos of moi in various stimulating situations over the years, hrm... 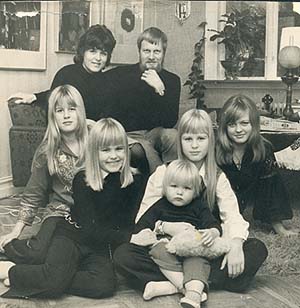 Mattias Ia Eklundh started out as a drummer at the age of six after buying Kiss' "Destroyer" (a bribe from his mother to let her cut his hair�bad move). Son of father Bernt and mother Inga, Mattias has also four elder sisters; Nettan (Anette), Nilla (Gunilla), Gittan (Birgitta) and Mulle (Karin). 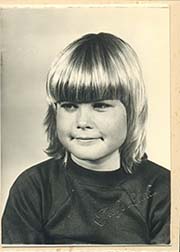 The nickname Ia is, pure and simple, an abbreviation of Mattias.

Seeing Frank Zappa when he was 11 changed his view on music forever and he has been a huge fan ever since. Mattias consider his major influences to be the inimitable Zappa and Kiss.

At the age of 13 he changed to guitar and began practicing fanatically. Self-taught on the instrument Mattias borrowed books from the library to learn music theory. 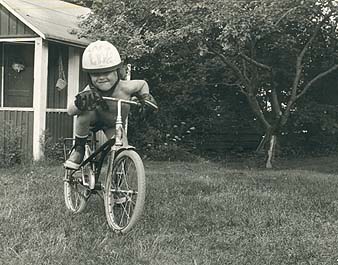 In 1991 Fate released "Scratch �n Sniff" (EMI) and Mattias was hailed as "The guitar player of the 90's" in Japanese magazines. After getting a thorough insight how the ugly showbiz-industry worked Mattias decided it was time to move on and formed Freak Kitchen in 1992.

Mattias is also the man behind the ugly rubber mask, Mr Libido, and released the, to say the least, weird album "Sensually Primitive" in the spring of 1997. 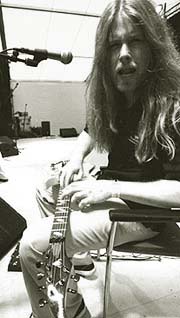 Eklundh frequently travels around the planet holding seminars in his strange playing style.

In the fall of 1999 the beefy solo-effort Freak Guitar was released, a monumental, six-stringed roller-coaster ride. Freak Guitar's success took everyone by surprise and it is still being released in various territories around the world, most recently by Steve Vai and Favored Nations in a brand new pressing. Consisting of 20 original tracks, Ia also included his very own interpretations of KISS� "Detroit Rock City" and "La Bamba". Must be heard to be believed.

Before dedicating his time and effort on the work of writing, recording and producing the fourth Freak Kitchen album in winter/spring of 2000 "Dead Soul Men", Mattias contributed an instrumental called "Yngwie 2000" on a Malmsteen tribute entitled Guitar Odyssey.

Ia also participated on the Jason Becker tribute "Warmth in the Wilderness" with his orginal track "Lydia's House". 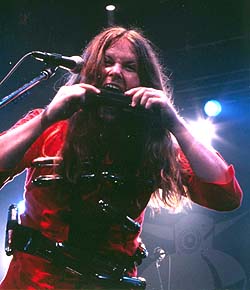 Mattias is today considered one of the most innovative and ground breaking guitar players around with a fast growing global following from fellow "guitar nerds" to simply true music freaks. Mattias' minimalist, home-brewed, and stripped down approach to the guitar has surprised record buyers and journalists around the world. There simply aren't any signs of expensive guitar effects or processors involved in his playing, despite the sometimes "outlandish" sounds you hear.

(Ia receives e-mails daily from dedicated guys and gals asking him what type of whammy pedal he owns. He finds this very amusing). 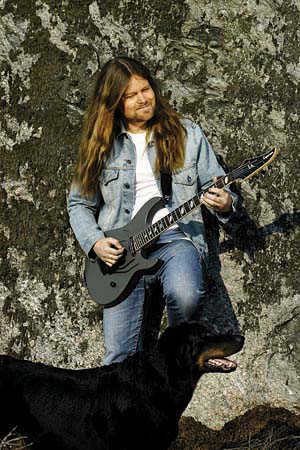 Imagine a musical frontier with no boundaries, no limitations, no restrictions. Allow us to unveil that very record---Freak Guitar-The Road Less Traveled, a new Favored Nations release by Swedish guitarist Mattias IA Eklundh. It's a six-string tour-de-force of insane explorations of sound that consistently presses the musical envelope. Crammed with 23 jaw-dropping tracks, all displaying Eklundh's imagination, seasoned versatility and fiery virtuoso technique, Freak Guitar-The Road Less Traveled is like nothing you've ever heard before. "The thing I'm most proud of with the album is I gave the record time," remarks Eklundh. "I think time is the key word for trying to break new ground. That's what it's all about. I'm influenced by the same guitar players as everybody else but I tried to walk the road less traveled, to grow my own mustache so to speak. I'm from Sweden and I do everything backwards. I'm left handed and I use no effects whatsoever. The guitar itself contains so many sounds you can use. I have very liberal ears and I wanted to make a listenable, unorthodox party CD."

The critical praise for the record has been unanimous with Eklundh enjoying five-star reviews from British publications, Kerrang and Guitar Techniques. UK Guitarist raves: "Eklundh's ear for melody is spot on, even during his most avant-garde moments, and an insane cover of "Smoke on the Water" is just the tip the iceberg. Faster than Malmsteen, smoother than Michael Lee Firkins and, dammit, better than Vai - this is undoubtedly the future of this style of guitar playing".

Blessed with a limitless musical imagination, Freak Guitar-The Road Less Traveled, Mattias IA Eklundh's second solo release, resonates with the sound of an artist comfortable in his own skin. This record isn't a shredder guitar wank fest. Instead, Freak Guitar succeeds because it's packed with great, and memorable songs. "Of course there are tons of guitar licks on the record, "says Eklundh. "But I really believe it's a guitar record for people who actually like different kinds of music. You don't have to be a guitar nerd to dig it. The star of the record is the songs. It's even more important in guitar instrumental music to frame your songs, make it easy for everyone to listen to and not just be a platform for showing off."

Hailing from Sweden, he first began playing guitar at age 13, finding inspiration in the work of musical non-conformists, Frank Zappa and KISS. His love of 'left of the dial' mavericks profoundly impacted his own artistic direction. "I'm not a musical snob. My record collection is one big mess of gypsy jazz, Zappa, KISS, Miles Davis, and Slayer among many others. Zappa and KISS were my main guys and are still inspiring to me. They were unconventional with what they did and were in many ways opposites of each other, hi-fi, low-fi. Zappa was all about the humor, the enormous skills, and the complexity of his music while KISS was just a sledge-hammer and I love both. That duplicity of sounds, approaches and philosophy has heavily influenced how I write and record music."

Besides his solo work, which includes 1999's Freak Guitar, and numerous sonic explorations with his group, Freak Kitchen, Eklundh's innovative guitar work has been heard on such records as Guitar Odyssey-A Tribute To Yngwie Malmsteen and Warmth in the Wilderness-A Tribute To Jason Becker. He's also created several guitar instructional DVDs for the Japanese market including "Hyper Freak Exercise" and "Super Virtuosity."

Opening with an arpeggio of notes, "The Road Less Traveled" finds Eklundh in prime gunslinger mode, capturing the listener with shards of incredible guitar dexterity and impeccable choice of notes. Following the majestic title cut comes "There's No Money In Jazz"--think Slayer meets Steely Dan in a dark alley. The musical fisticuffs are framed by speedy, high velocity guitar firepower and machine-gun drums punctuated by some tasty and lean jazz licks. Shifting gears, the melancholy feel of "Father", a song Mattias dedicated to his late father, Bernt, brings down the volume, torrents of nimble acoustic guitar imbue the blue heartbreak of this extraordinary song. "I think putting a purely emotional song like 'Father' on the record ultimately makes the album even more powerful for the listener. It's all about dynamics and working on different layers within a song."

Covering one of hard rock's most enduring classics, "Smoke On The Water" is a treacherous proposition for even the most seasoned musician. Yet Eklundh's up for the challenge, turning the song on its ear, reinventing this quintessential metal masterpiece. "I can't believe I actually had the nerve to cover 'Smoke On The Water' (laughs). That's the song a guitar player should never cover. But my neighbor, a fifteen-year old kid, heard it for the first time and played it for me insanely loud and I rediscovered it. I said, 'maybe it'll be cool to try and imitate the phrasing of the vocals with my guitar and use plenty of natural harmonics'. It was tricky to do but I'm very happy with how it turned out. I was doing promotion for the album in France and they played it at a disco and old and young people were dancing like crazy to it. They didn't really care about the flashiness of the guitar playing, they just wanted to have a good time."

Ultimately, the 23 tracks comprising Freak Guitar-The Road Less Traveled will take you on a musical trip you'll never forget. Eklundh lets his freak flag fly, proving that sometimes the path for blissful guitar enlightenment lies in the trail a little to the left of the road. "I think there's really something for everyone on my record. You just have to listen to it with an open mind and open heart."