Why I'm so fascinated about David Cronenberg's movies 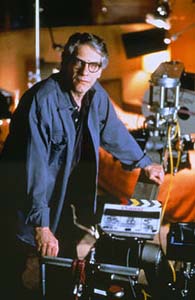 The first time I came in contact with excellent Canadian director, producer, screenwriter David Cronenberg I was about nine or ten years old (I haven't got a clue how the hell I ended up in front of the TV or who was the responsible parent, hmm...) The film was Rabid and it truly scared the shit out of my tiny intellect. The scene where Dr. Dan Keloid (Howard Rysphan) gets rabid and freaks out with a pair of scissors during an operation, cutting the nurse�s finger off, or when he spews some serious rabid fluid when locked inside some kind of asylum ambulance still give me the creeps. Huoa!

I have remained fascinated by Cronenberg�s movies over the years, slowly discovering how many different layers they work on (most of them I�m probably not aware of at all).
At first it was (being a splatter teenager) special effect stuff, the typical horror thrills and the appealing weirdness of it all that interested me. Since then the films have gotten more sophisticated, and so has the horror. I would consider, maybe Dead Ringers (1988) the scariest of Cronenberg's films yet it has nothing to do with the "slasher" genre he so often associated with ("Dave Deprave", "The Baron of Blood"). Although I believe it's a true horror movie.

Why do people need to categorize everything? Freak Kitchen suffered from a lot of promotional bullshit problems on the release of our third record since no one knew how to describe the music. To me, orginality and individuality is a strength. To break new ground is the point. The record industry (and film industry it seems) doesn't think so.
Here's what Dave has to say about it:

"My films are sui generis. It would be nice if the could form their own genre, or subgenre. It's the need to sell films that causes this kind of categorization. And, of course, there's always a critical impulse to categorize and label. But people seems to think that it's necessary to categorize before they can understand. My films really do exist on their own. There is no no need to do that to experience them properly."
(Cronenberg on Cronenberg, Edited by Chris Rodley, Faber & Faber 1992).

If you're a die hard Freak Kitchen fan you know that some of our songs are inspired by or revolve around some of David Cronenberg's films. Below are some short tips on what might be good idea to start with if you're not familiar with his complex, strange, innovative and very un-Hollywoodish films. 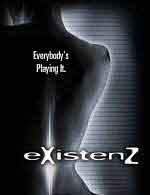 I just came back from a rainy Paris where I saw eXistenZ the other day.

The film is a truly amazing hybrid between many of Cronenberg's earlier films (it smells Videodrome especially, but also Naked Lunch at times and that odour ain't to bad) as well as tons of new inventive stuff (love the game pod and the "Chinese special"; the flesh gun!). eXistenZ is very graphic, it has to be, but it's liberating to see that Cronenberg didn't end up in all the usual Hollywood animation bullshit, which, in my opinion, still doesn't come close to effects, locations, e t c, actually filmed.

It's great to see some familiar "old flesh" (Ian Holm, Robert A Silverman , the beautiful music of Howard Shore, Peter Suschitzky's photography, etc) mixed with some "new flesh" (Jennifer Jason Leigh, Jude Law and a very inspired Willem Dafoe, e t c ). The plot and dialouge are as brilliant as ever.

eXistenZ is also surprisingly funny, but as Cronenberg's fingerprints all over the place, it leaves you with a feeling of insecurity. I left the theatre with a smile though, and my caf� au lait never tasted better. �

Videodrome from 1982, starring James Woods (brilliant, as always) and Debbie Harry (Blondie), among others, is a superb piece of film.

Watching the tape slowly causes a brain tumour, making Max hallucinate heavily. This escalates as the film goes along and where a more main stream and less brave movie would switch from the main character's state of mind (which ain't too swell here, I assure you) to our "objective" point of view, the reality of Max Renn is the reality shown, whether you like it or not. 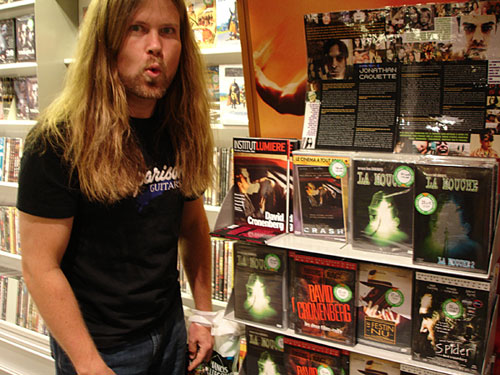 The same happens in the Naked Lunch (1991). Cronenbergs aversion to to compromise in his art demands respect.
(In a time when Hollywood puppet directors, dancing to the film studios executives bullets, cheerfully kissing ass, David Cronenberg's movies are pretty fucking important. Yes! There I said it!)

Our first record, Appetizer, has two songs influenced by Videodrome; "See you in Pittsburgh" and "The New Part". A lot of confused people asked me at the time of the release of Appetizer what "...Pittsburgh" actually was about. I told them about the movie, which is shown on TV every now and then, and hopefully a few question marks have been straightened out. I don�t know.

A couple of months ago I bought the director's cut of Videodrome on laserdisc and to my amusement chapter 24 on the disc is called "See you in Pittsburgh"... (Woods says it in the movie, I didn't come up with the phrase, but it was great having a chapter in your favourite movie linked, in some abstract way, to our music). 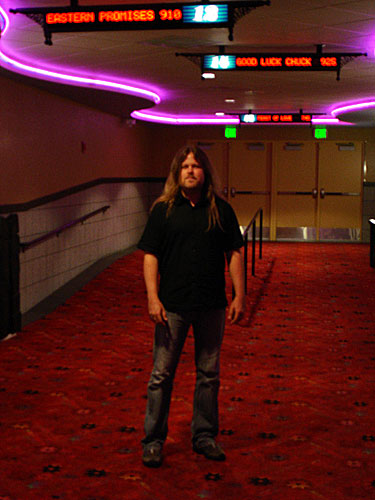 Crash is a really strange piece of film. It's based on the 1973 novel by J.G Ballard. I enjoy it, in a peculiar way, a lot. It�s very hypnotic and disturbing in its slow tempo. Light years away from what the "cut, cut, cut"-MTV generation is used to. Once you've seen it, you'll never forget it, although you may dislike it for several reasons. I can hardly think of anything more hard core than this except for maybe Dead Ringers. Don't get me wrong, Crash is not the slightest gory (well, that's not entirely true, but it's not more violent than your average crime-show or the brain dead "cop"-shows which are so popular these days). It�s quite nude, but never pornographic. It doesn't turn you on (depending on what kind of shit you're into of course). The dialogue is very sparse, almost dream-like and Howard Shore's music is, as usual, top notch and ground breaking. I got very influenced by the guitar orchestrations on the soundtrack to Crash in my tune "Dr. Pangloss goes to Lisbon" (from Freak Guitar).

The film, if you missed the bullshit controversy surrounding it a few year's back, is about an alienated bunch of people who discover they like to sink their organs, so to speak, into a bizarre mix between sex and car crashes. This unites them, in quite a sweet little group of jaded human beings, and the closer they come to getting killed, the higher the sexual stimuli. If this doesn�t work out, fucking in car wrecks, next to cold metal wing of a small airplane, on the balchony facing a major highway, e t c. will do it.

Take your time when you watch it, preferably alone, and don't except any car-chases, despite the misleading trailer. Keep your mind open and Crash will reward you.