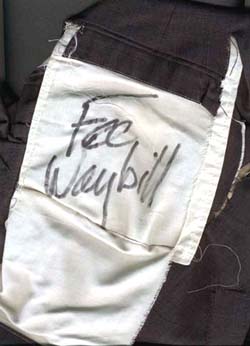 I experienced the best concert in my entire life a few years back: The Tubes live in my home town Gothenburg (actually the gig was in the middle of nowhere on the remote island of Hönö). Pure magic.

I became a die hard Tubes fan when was a kid but never got the chance to see them live.

Completely sober I stood in front of the stage in this tiny club and was totally blown away by this incredible, energetic band. In the middle of the show singer Fee Waybill ripped his pants off and threw away. They ended up in a giant chandelier to everyone's suprise. When somebody tried to pull them down, the medieval looking thing began swinging in an evil manner. Guitar player Roger Steen gently told us to let it go before somebody got hurt. I had other plans...

After behaving like an embarrasing fan-idiot (a relieving feeling!) after the show, taking photos of myself and Waybill, getting my old records signed, buying posters, t-shirts and the new studio/live album The Tubes World Tour I glanced with sinister eyes on the torn apart trousers, still dangling in the ceiling.

With the smile of a greasy car salesman I asked one of the guys working in the club if they possibly could have a ladder stached somewhere nearby. Of course they had, but since they knew I was playing in Freak Kitchen and they, unsuccessfully, had been trying to get us playing in their club for a while, they immediately took advantage of the situation. Damn. The result: one pair of pulverized trousers, formely worn by a wild American rock singer traded for one Freak Kitchen concert. What a bargain!